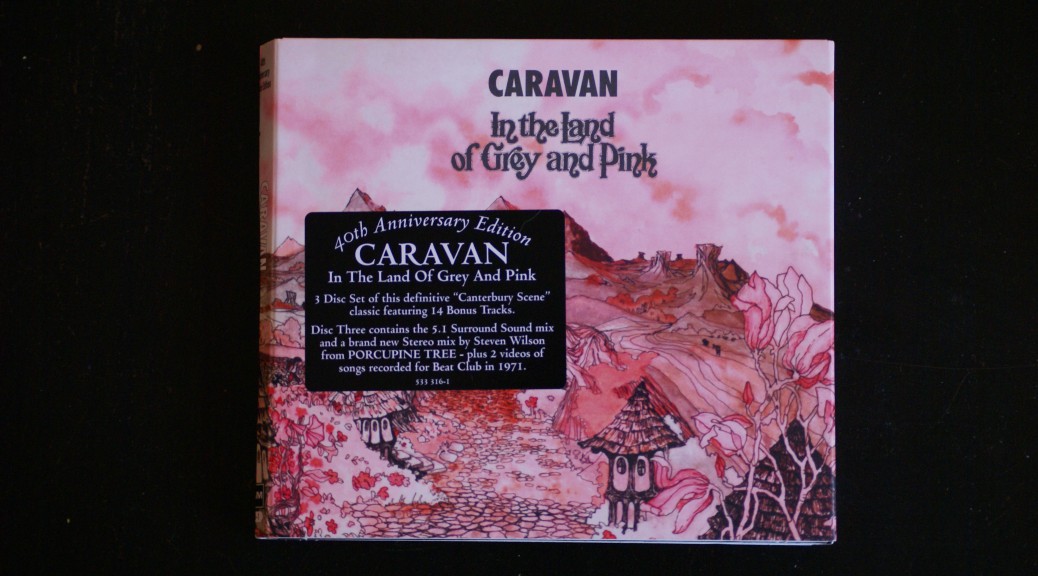 I’d waited so long for this album. When I checked the mail yesteday, I’d sort of given up hope, but there it was – finally! A neat little package from amazon containing this year’s most exciting release thus far, the 40th anniversary edition of Caravan’s classic album In the Land of Grey and Pink. In addition to a remaster of the original album, this deluxe edition has several extra bells and whistles including numerous bonus tracks (four of them previously unreleased), a couple of videos of the band performing for german television in 1971 including a version of Winter Wine which was never broadcast and some new mixes by Porcupine Tree’s Steven Wilson.

All this is a real treat to any Caravan fan and I got it cheap too (about 12 pounds I think) so it’s easily my best music buy so far this year. My only gripe with the release is that Steve Wilson’s two complete album mixes, the 5.1 surround mix and the new stereo mix, are both on disc 3 which is a DVD. I don’t listen to music on DVDs .. aside from the DVD rom on my computer, my only player is my xbox360. I like to digitize my music and listen to it on my computer and making MP3 copies of the material on the DVD disc is proving to be a real hassle. Why couldn’t they just release Wilson’s new mixes on CDs? Maybe someone else will be able to get those MP3s if I can’t ..

I’ve yet to really sit down and listen through the whole of the new stereo mix, but what I’ve heard sounds good and actually clearer than the “old” remaster featured on disc 1. I don’t have surround, so the 5.1 Surround mix will have to wait.

Some added trivia! Among the bonus tracks, there’s also a version of Nine Feet Underground in which Steven Wilson has stripped Richard Sinclair’s vocals from the track and replaced them with his own .. ballsy move, Wilson. Very ballsy! I’m still a bit confused on how I feel about that, but considering it’s only one of the five versions of the song from the release and considering the work he’s done for us all to enjoy with his mixes, I guess it’s alright, even if it’s not the sort of thing I would have done. If anyone’s curious about whether or not Wilson does a better job at it than Sinclair, I’d say he does not, but it still sounds alright.

So, conclusion : Get it! It’s well worth it and when it comes to the DVD related problems I and likely others are or will experience, maybe we can help eachother out.