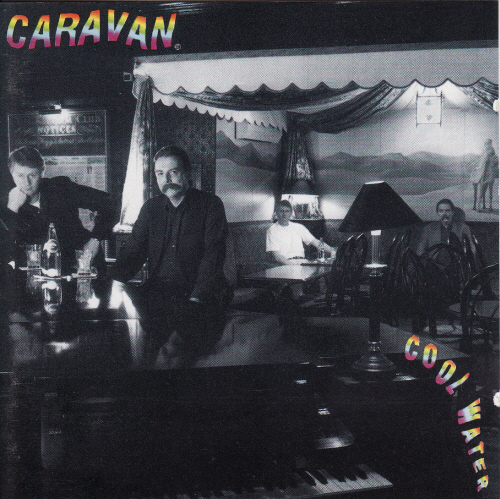 This anachronism in the recorded history of Caravan was released in 1994, but all of the songs were recorded as a follow-up to “Better by far” in 1977 and for some reason shelved for almost 20 years. I’m gonna take the liberty to rewrite the history here and place it where it belongs chronologically, since Pye obviously decided not to tamper with the tapes at all when he finally decided they were release-worthy. A little revisionism hasn’t hurt anyone. Yet. And what’s 20 years in the cosmological perspective anyway? The Caravan fans of Alpha Centauri sure would care less when gazing towards us through the light years of distance. I hope they will catch this review though.

I hope you will too, dear earthling, because even if it’s basically a collection of more or less raw demo recordings, at least the first seven tracks that apparently have been subjected to some production enhancement, it’s at least as worthy a listen as “Blind dog”. And for one thing, guess who’s back: Richard Sinclair! Not that his presence makes him that much justice since Pye is the one and only voice present on here. These cool waters ain’t running through no land o’ grey’n pink, fo’ sho’! It’s still an interesting listen on a song-for-song basis, and it has its shares of ups an downs. One serious down, and I do mean serious, is the bloody atrocious “Tuesday is rock and roll nite”. As you might read out from the title, awful in itself, they are trying their hands on good old-fashioned rock’n roll, and as you might guess, it results in a major facepalm. Hearing our favourite sissy boy proclaim “rock’n rooouuull, yeah” in the weakest and most wimpy intonation possible is the core definition of inadequacy. Yes, they had incorporated more rocking elements in their songs before, but they always adopted it to their own style. This time however, they try to step out of that style in favour of something they were simply unfit for. You gotta hear it at least once of course, just to witness why Pye is the last go-to-guy on earth when it comes to gaining knowledge about where tonight’s rockin’ is at.

Fortunately, none of the other tracks comes close to this puddle of embarassment (which sure would be an achievement in itself) but there are still some rather bland funk workouts present. “Ansaphone” doesn’t do much, neither harm nor impact, and “You won’t get me up in one of those” is at least memorable in its bouncy rythm pattern that betrays some new wave influences. “Cold fright” even approaches disco which is perfectly understandable, given the times and all, but not terribly interesting melody-wise. We’re given a few slow-paced ballads as well, several of which are based on the same 6/8 rythm which gets tedious after a while. “To the land of my fathers” is little more than pure atmosphere and “Side by side” is mainly a re-write of “Better by far”. “Crack of the willow” at least boasts a really good synth line but the real highlight out of these is the title track. “Cool water” is a really pretty barroom lounge-jazz shuffle, with a hushed atmosphere perfectly fit with the lyrics taking place at the closing hour of a night out during which a drunk and exhausted Pye wishes for nothing more than some cool water. Haven’t we all been there? The one thing that bugs me though, is the fact that it’s placed as the opening track when it more than anything should have been put last. It’s just designed to be closing whatever comes before it and the only rational reason I can think of why it opens the album, is that they made a mistake in the sequencing process. All in all, it’s a perfect afterparty track to play when arriving home late at night and settling down in the couch with a girl under your arm. God I hate being single. I want a girl, now! (Yeah, as if a girl would be into Caravan, much less reading long-winded reviews of them! If you are though, and look like Kate Bush, PM me.)

What convinces me even more that the positioning of that track was a mistake is the fact that it’s followed by “Just the way you are”, which is an obvious successor of “Feelin’ alright” and thus a much more apt candidate for opening the album. A bouncy pop shuffle in the best Badfinger tradition, only catchier. “Poor Molly” continues the transatlantic popster tradition in a compact Steely Dan-fashion. Play this back to back with “Tuesday is rock’n roll s h i t e” and spot the difference. The closing “Send reinforcements” is once again mirrored in the previous album, this time in “Nightmare” which means it’s perfectly good in itself.

As you can see, there was little progress made in the making of this could-have-been album so on one hand it might have been just as well that it wasn’t released in time, especially since their previous album wasn’t exactly successful in the eyes of the world. On the other hand, you should really give it a try, if only for the selected few tracks that are truly worthy. And, by all means, for the valuable lesson of “Tuesday is rock’n roll tripe”.