Fans of Hatfield and the North may recognize the post title as the title of one of the musical themes that make up the bands 20-minute long epic song Mumps from their second album The Rotters’ Club. That musical bit at the start and ending with that stunningly catchy riff. The title seems to be a reference to a Monty Python’s Flying Circus skit and seems to come from the Oscar Wilde sketch from the final episode of season three called Grandstand. In the sketch, Oscar Wilde tells the Prince of Wales “your Majesty is like a big jam doughnut with cream on top”.

As mentioned, the musical piece by Hatfield and the North is a part of their epic track Mumps from their second album. However, Your Majesty Is Like A Cream Donut has also made other appearances on record. In 1975, the song appeared on the Virgin sampler record V from 1975 alongside tracks by Robert Wyatt, Henry Cow, Slapp Happy and Steve Hillage among others. On that record, Your Majesty… segues seamlessly into Oh What A Lonely Lifetime, another beautiful song which appears in a few places outside the bands studio albums, such as version from John Peel’s show in 1974 which can be found on the archive release Hatwise Choice where it is named The Lonely Bubbling Song.

Anyways, before I digress too much, while this V sampler album may be hard to find today, that version of Your Majesty Is Like A Cream Donut incorporating Oh What A Lonely Lifetime can now be found on what I believe is still the latest rerelease of Hatfield and the North’s debut, a version from 2009 by Esoteric Recordings. This rerelease also contains the band’s Let’s Eat (Real Soon) single featuring Let’s Eat and a fine version of Fitter Stoke Has A Bath.

I consider Your Majesty Is Like A Cream Donut to be one of the more pleasing things the band ever put out and, while it is beautiful in Mumps, it works very well alongside the gorgeous Oh What A Lonely Lifetime. Very well indeed! If you’d like to hear it for yourself, someone on youtube has already uploaded the piece. So, for your listening pleasure, I give you ..

What do you think?

God Song is another classic and, for me, another favorite from the Canterbury scene. It was first released on Matching Mole’s Little Red Record from 1972, but other versions exist, for example a lovely version with Robert Wyatt singing and playing the piano on his archive release Solar Flares Burn for You, released in 2003. The lyrics were written by Robert while the music is credited to Phil Miller who was, at that time, Matching Mole’s guitarist.

To me, the song showcases some amazing lyrical skills by Robert. The song itself is a sort of prayer where a drunk singer, having a moment of honesty, expresses his frustrations with God. Towards the end of the song, the singer’s fear of God seems to resurface and he asks Him to discard his frustrations as a joke or drunken rant.

Don’t hunt me down for heaven’s sake

You know I’m only joking, aren’t I

The song portrays God as something like a bully, possibly playing a big joke on Mankind, expecting rules to be followed while being absent and not involving himself in the betterment of his followers lives and possibly “hunting down” those who dare complain. The use of everyday language and expressions and the partly rantish nature of the lyrics (such as the changing subjects and the suggestion that he gives his son a wife and a sexy daughter next time around) may seem comical at first, but actually help make the song feel more real and honest.

Most of you who are interested in the scene will know the Matching Mole version already and so I thought I’d post here Wyatt’s version from Solar Flares Burn For You which I believe is the same as on the Flotsam Jetsam compilation, only that one has Fol De Rol attached to the end of it.

The song was also played by Hatfield and the North and has been sung many times on stage by Richard Sinclair. The last time they played it may have been in drummer Pip Pyle’s funeral in 2006, a very beautiful and touching gesture. Back in 1972, the band also played the song with Robert Wyatt as a guest singer in a duet with Richard Sinclair. Here is such a version sung at the start of this medley, supposedly from a set they played together in France in 1972, according to the video’s description.

To me, God Song is an immortal classic which never seems to get old. What do you think? Any other fans out there?

Robert Wyatt’s Shipbuilding is a song familiar to most who are acquainted with the Canterbury scene, but the song also has an interesting history fewer may be aware of.

Clive Langer wrote the tune for Robert Wyatt during the Falklands War in 1982, but was not happy about his own lyrics for the song. At a party hosted by Nick Lowe, Langer played the song for Elvis Costello who came to Langer with new lyrics only a few days later.

Costello’s lyrics is an anti-war song about the contradiction of how the dying traditional trade of shipbuilding on England’s coast is temporarily revived by a need to replace ships sunk during the Falklands war by builders who send off their own children to go to war, risking their lives on the boats they build. The first line of the song is “is it worth it?”, asking if the fruits of the temporarily revived shipbuilding trade such as “a new winter coat and shoes for the wife – and a bike cycle on a boy’s birthday” is worth the human costs of that labor.

A studio version of the song was recorded and released as a single in 1982 with Robert Wyatt on vocals, Clive Langer on organ, Steve Nieve (piano), Mark Bedford (double bass), Martin Hughes (drums) and Elvis Costello (backing vocals). A video was also made for the song and it reached #36 on the UK Charts in May the following year.

The song was also included on the Robert Wyatt compilation album Nothing Can Stop Us! released the same year which containing mostly cover songs. Elvis Costello also recorded his own version with his band The Attractions on their album Punch the Clock which was released in 1983. Costello’s recording also includes a performance by the legendary jazz trumpeteer Chet Baker.

Also read : The Lasting Legacy of Shipbuilding @ The Telegraph 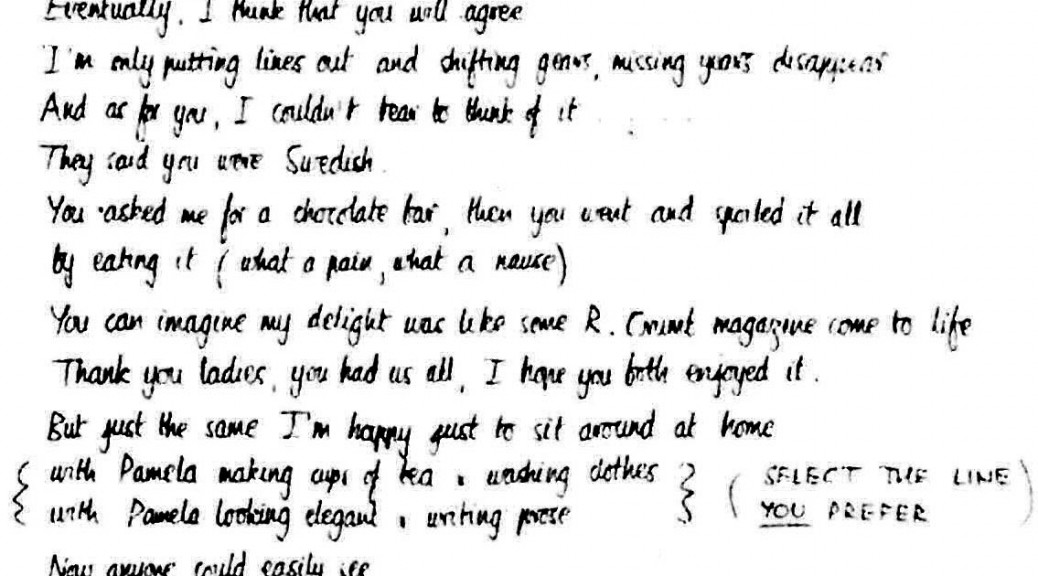 [cc_img_effect url=”http://politeforce.torden.org/wp-content/uploads/2011/04/Hatfield-and-the-North-Fitter-Stoke-has-a-Bath-220×300.jpg” frame=”on” id=”1″]
Today is – or would be – prominent Canterburyan Philip “Pip” Pyle’s birthday. Sadly, Pip passed away in 2006, but his music lives on. Although he’s most famous for being a brilliant drummer, he was also a composer and songwriter and wrote lyrics for songs like “What’s Rattlin'” from Richard Sinclair’s album R.S.V.P., Let’s Eat (Real Soon) which was Hatfield and the North’s only single and the B-Side from that single which was Fitter Stoke has a Bath. Fitter Stoke also later appeared on the band’s second album Rotter’s Club – and then again even later as a bonus track on rereleases of the band’s self-titled debut.

For me and many other fans of Hatfield and the North, Fitter Stoke has a Bath in particular stands out as one of the band’s finest songs and absolute highlights. Aside from the timeless beauty of the composition and it’s execution, the words and the subject matter has great appeal to me. Although I’ll admit I don’t really understand all of it (not much of it at all come to think of it), it represents to me an appreciation for life’s simple pleasures. Perhaps the line “I’m drowing in the bathroom” is more dramatic than I give it credit for, but coupled with Richard Sinclair’s bubbley singing, the image conjured in my mind is of someone simply enjoying themselves in the bathtub (something I can certainly relate to). A refrain going “ding dong ding, dong ding dong” just seems like it’s written by someone who’s got better things to do than worry about life, a philosophy I’m sure many of us could learn a thing or two from.

Despite being a bit cryptic, I believe the song is also a lot more personal than the casual listener is aware of. The name “Fitter Stoke” was actually the name of Pip’s daughter Alice’s imaginary friend while Pamela from the song who makes tea and washes clothes – or looks elegant and writes prose (whichever line you prefer), was his wife. In addition to the song being a musical delight, these attractive and a little intimate details help make Fitter Stoke has a Bath an immortal Canterbury classic and from a fan’s perspective, listening to it is the perfect way to remember Pip Pyle on his birthday.

My personal relationship with Pip is through his music, but I know those who knew him misses him a great deal. May his memory and music live on!